The 5 Main Muscles of Movement.

The trapezius muscles are the most superficial muscle layer of the upper back and back of the neck.

The trapezii (plural) form a kite-shaped sheet of muscle that extends from mid-back to the base of the skull, and across the upper back towards each shoulder.

The left and right trapezius muscles meet on the body's midline. 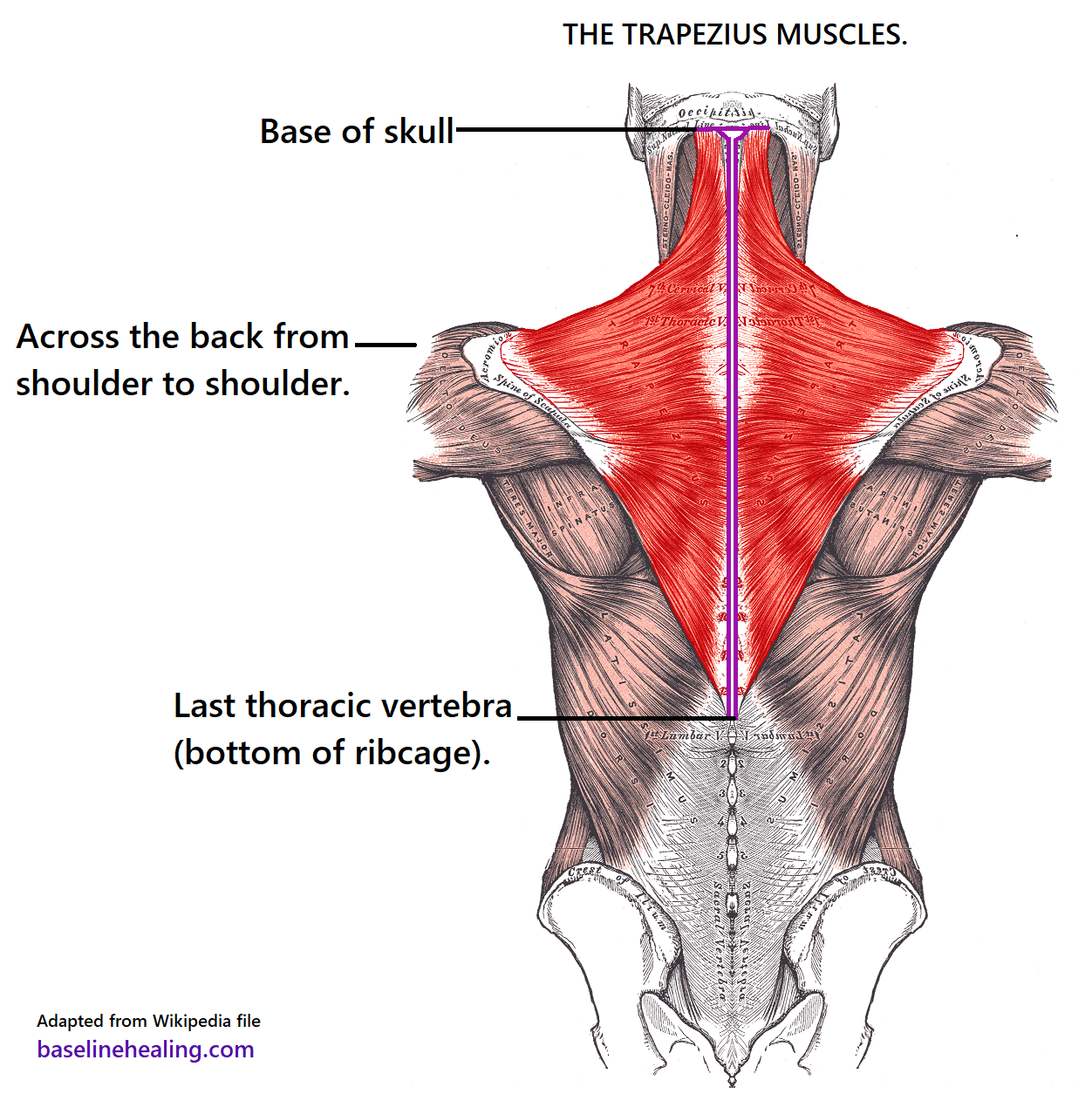 The trapezii are large, thin muscles. They are sculpted down the sides of the neck and as they extend out to each shoulder, attaching to both the scapula (shoulder blade) and clavicle (collar bone) of each arm. 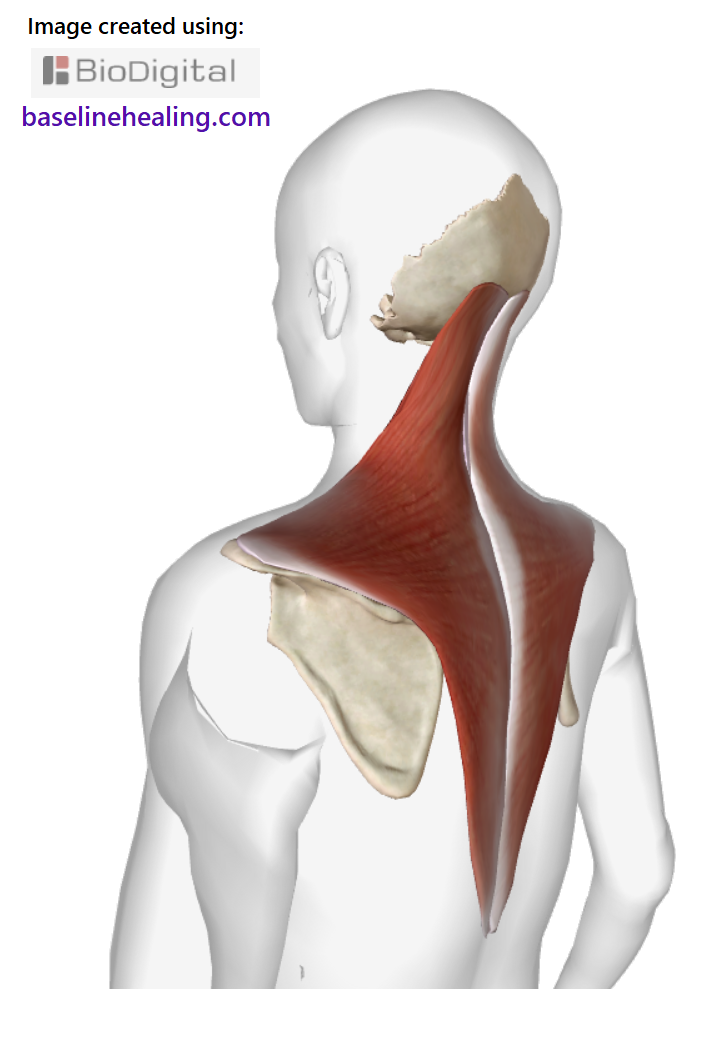 The whole of each trapezius muscle should be free to fully extend, without pain or tension, supporting the head and arms through a full range of natural movement.

Midline Attachments Of The Trapezius Muscles.

The left and right trapezius muscles attach to the cervical and thoracic vertebrae (bones of the spine) via the nuchal & supraspinous ligaments. 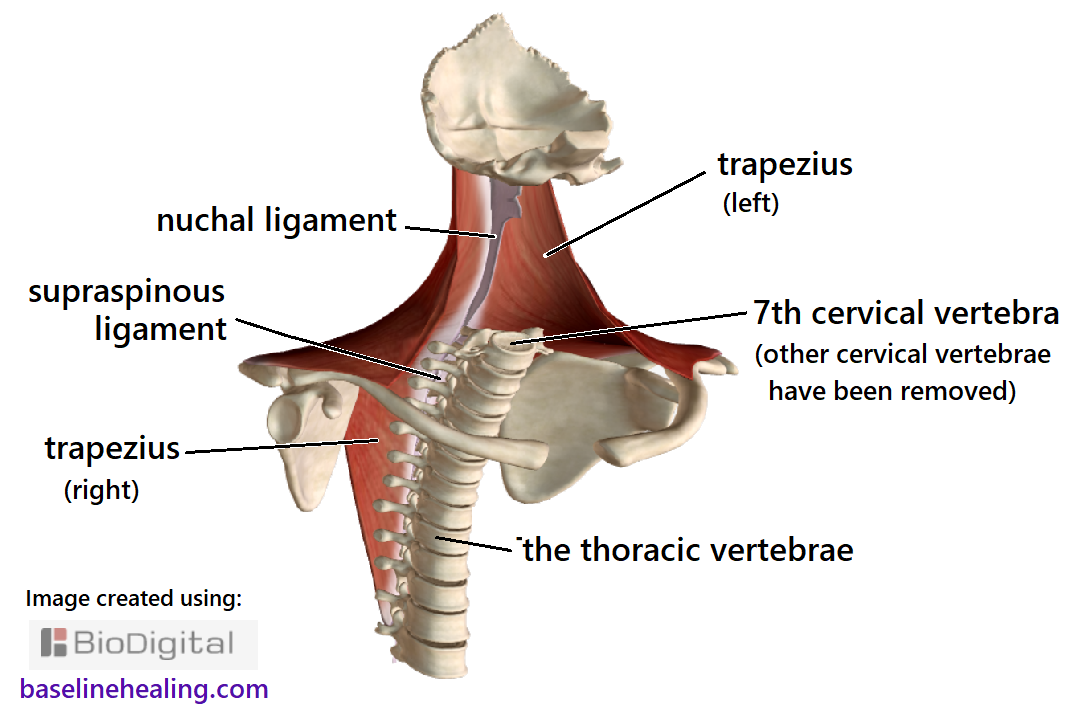 Sections Of The Trapezius.

Current descriptions split each trapezius into 3 functional sections - the upper, middle and lower trapezius, based on the direction of the muscle fibres.

{A.k.a. the superior (i.e. higher than the other sections) trapezius or the descending (i.e. the muscle fibres descend) trapezius.}

The upper trapezius attaches to: 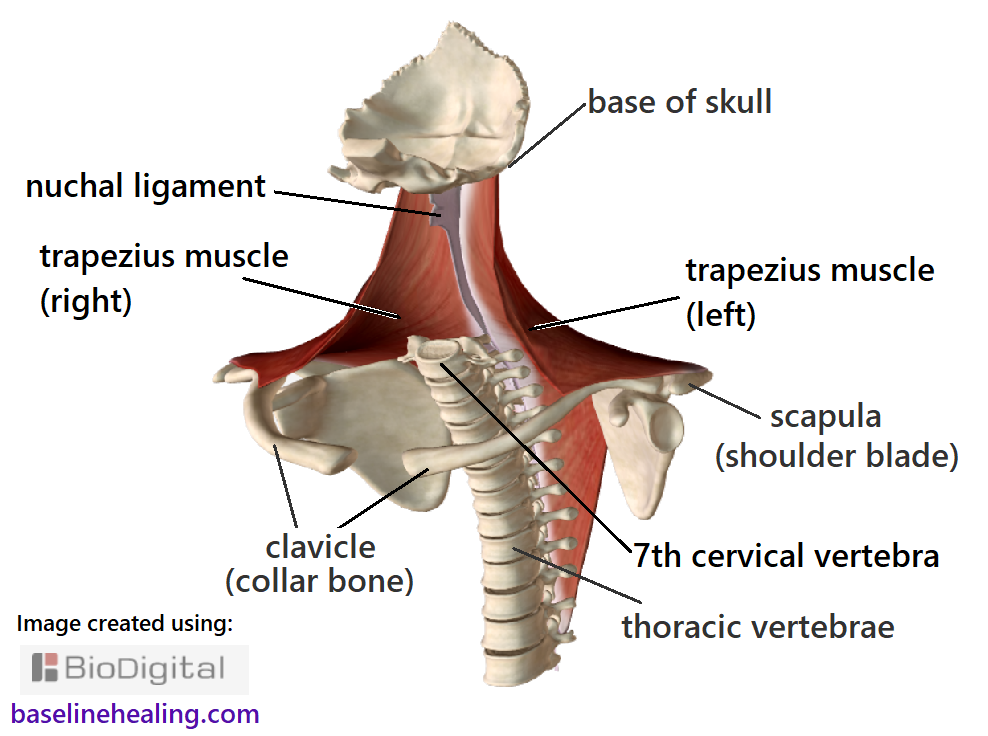 The middle trapezius attaches to: 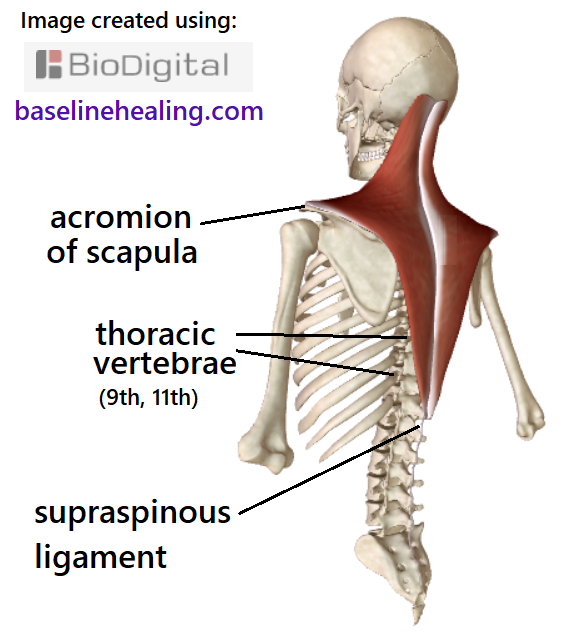 {A.k.a. inferior (i.e. lower than the other sections) trapezius or the ascending (i.e. the muscle fibres ascend) trapezius.}

The lower trapezius attaches to: 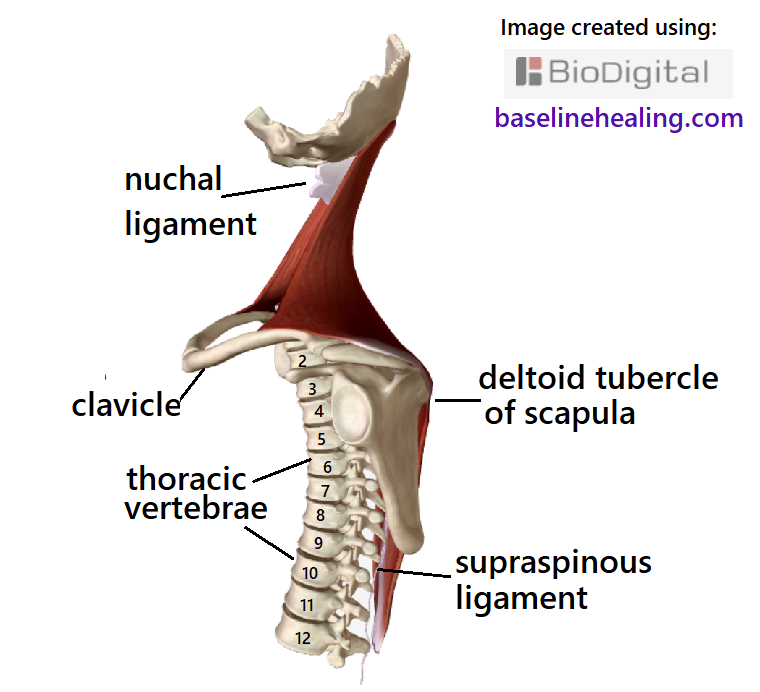 Movement of the upper body should begin from the lower trapezii.

With Base-Line support in place, think of activating both your lower trapezii starting from midback, extending upwards and outwards towards your shoulder blades. 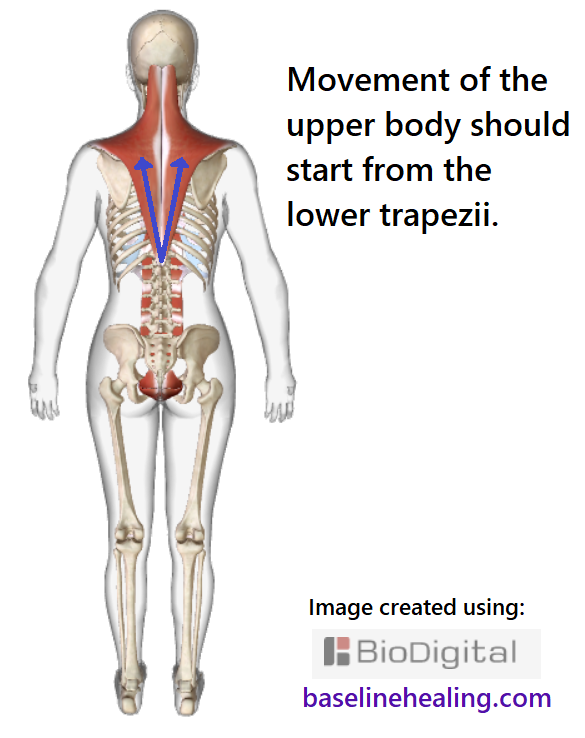 Attachments Of The Trapezius - Summary. 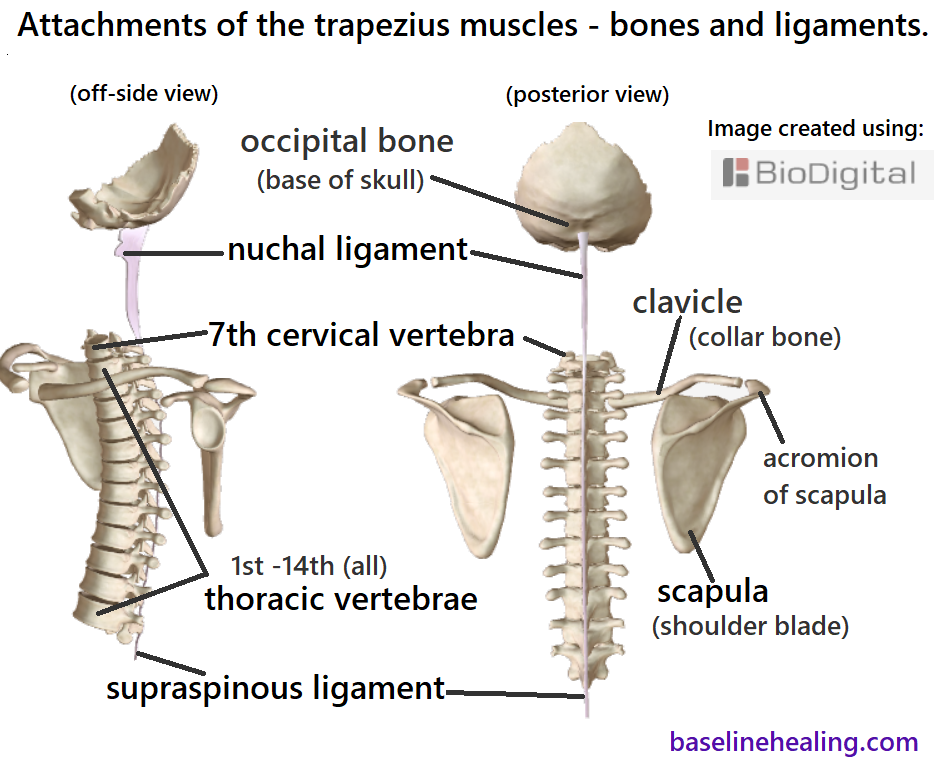 Between the 6th cervical and 3rd thoracic vertebrae (the base of the nuchal ligament and start of the supraspinous ligament) the trapezius muscles are connected to the midline by a broad semi-elliptical aponeurosis (thin sheet of strong connective tissue), forming a tendinous ellipse between the shoulder blades. 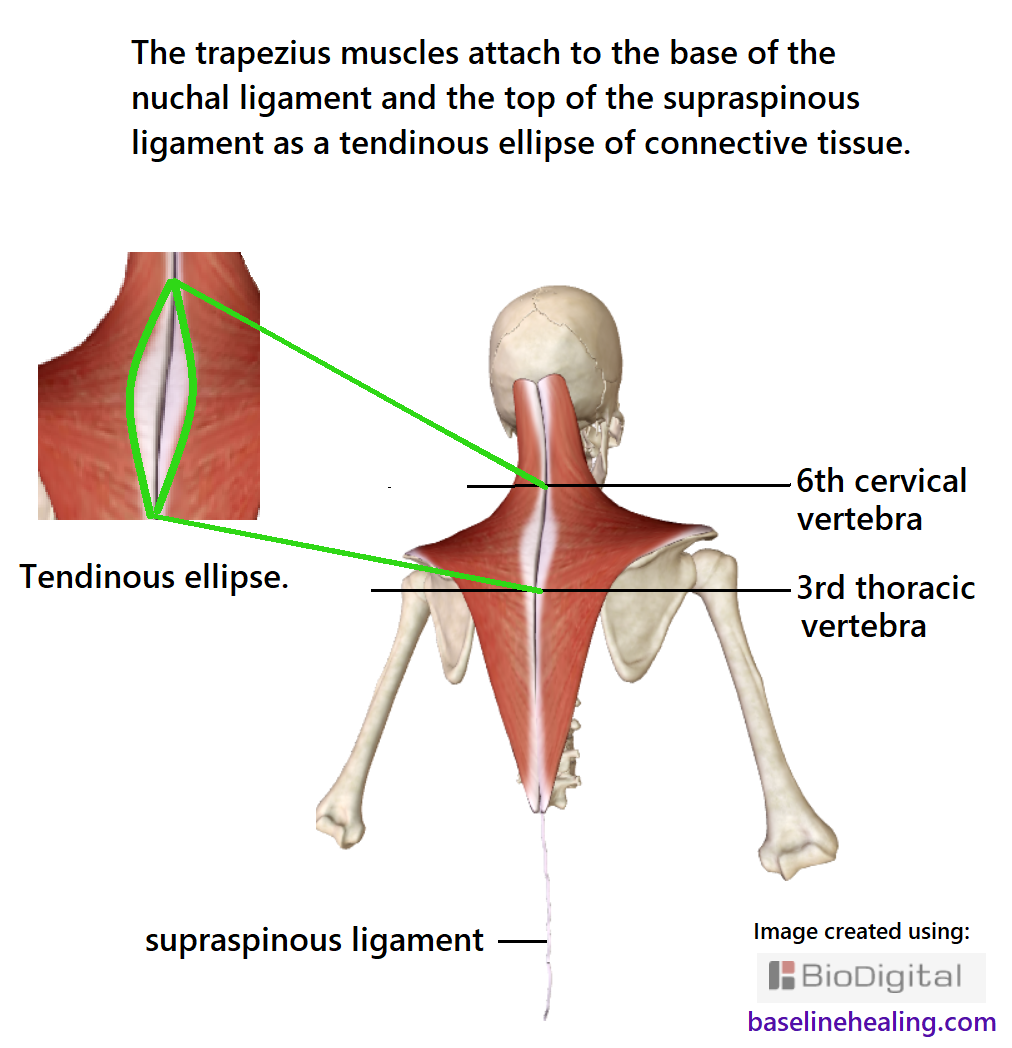 Posture, Alignment And The Trapezius Muscles.

The trapezii should be free of restrictions, guiding the head and arms through a full range of natural movement when connected to Base-Line (pelvic floor and rectus abdominis) support. 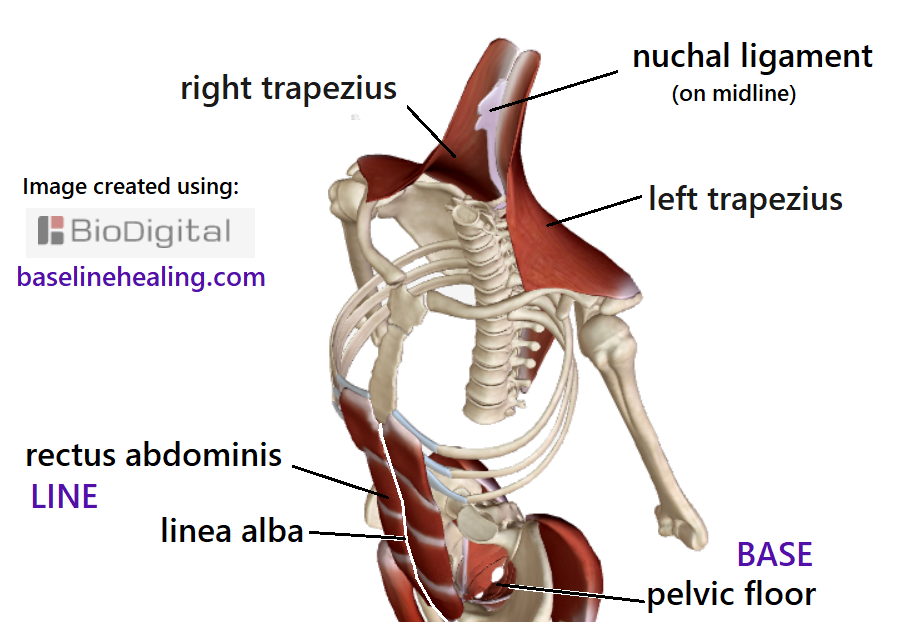